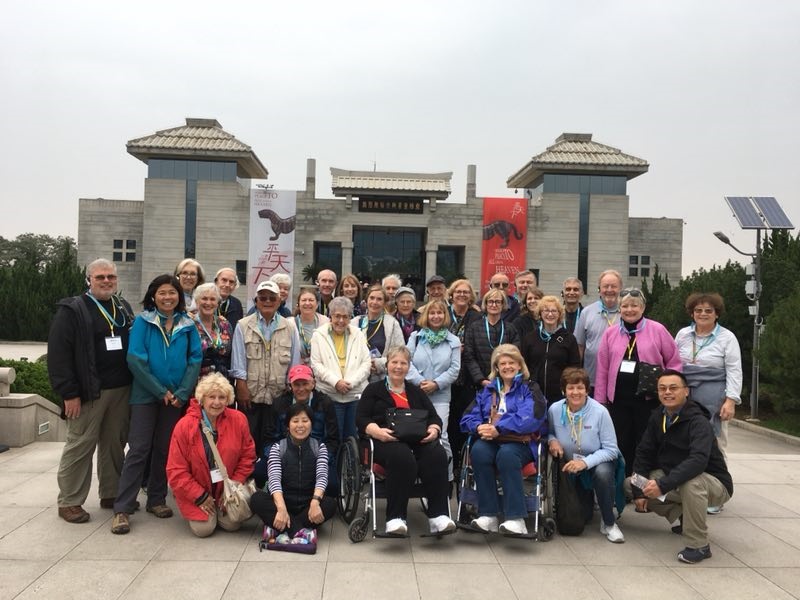 This presentation chronologically highlights from the trip and photos by OLLI members.

In China, square dancing or plaza dancing is extremely popular among middle aged and retired people in cities. Dancing is excellent exercise and provides an opportunity for social contact among friends.  These videos are of people dancing at the Goose Pagoda in the city of Xian. OLLI members were invited to participate in dancing by the local people.

Kite flying is one of the most popular traditional sports in China. This video shows a lady in Xian exercising with a Ribbon Kite.

A panda's daily diet consists almost entirely of the leaves, stems and shoots of various bamboo species. Bamboo contains very little nutritional value so pandas must eat 12-38kg (26-80 lbs.) every day to meet their energy need. In this video a giant panda is munching on a pile of bamboo.

Pandas love to play. This video shows panda play wrestling at the Chengdu Research Base of Giant Panda Breeding in one of the panda enclosures

The Red Panda is a mammal species native to the eastern Himalayas and southwest China and is listed as Endangered. The red panda approximated the size of a domestic cat.  Despite its name it is not closely related to the giant panda, but it is interesting animal to observe walking and climbing in the trees

Fengdu got its name as the Ghost city in the Eastern Han Dynasty. One can either walk up the mountain from the Yangtze river to the city or take cable cars to the top.

Shennong Stream is a tributary of the Yangtze River. The crystal-clear steam flows swiftly from north to south through deep gorges, and a boat tour allows you to experience an adventure along this river. As entertainment the tour boats, paddled by locals often race each other. Before the Three Gorges dam was build raising the water level the paddlers needed to pull their laden boats up the shallow river walking along the shore as seen in the second video. In the third video at Shennong our guide and an 80-year-old, a paddler sings as we paddle up the river

With the building of the Three Gorges Dam of the water level of the Yangtze river was raised more than 150 meters (500 feet) allowing cruise ships to navigate the river above the dam. The next video is the view along the river from the ship.

The Suzhou Grand Canal is a section of the Grand Canal from Hangzhou to Beijing, which was built about 1400 years ago. This section of the canal makes a circuit of the Suzhou Old Town playing a role as a moat and and important means of transportation of gods and people since its construction. The next two videos show OLLI member getting on the boat for the Canal Cruise and cruising the canal.

Shanghai Skyline is a symbol of the modern city. The Pudong district of Shanghai, home to some of the tallest buildings and skyscrapers in the world gives the city a unique identity. At the view of the city is spectacular with the skyline’s brilliant lighting. The following videos are night views of the city from the Pudong River

Shanghai is the home of some of the best acrobat shows in the world. The following videos of an acrobat on the stage on a boat balancing plates was truly amazing and the motorcycles circling in a cage video was quite believable. The show was spectacular.